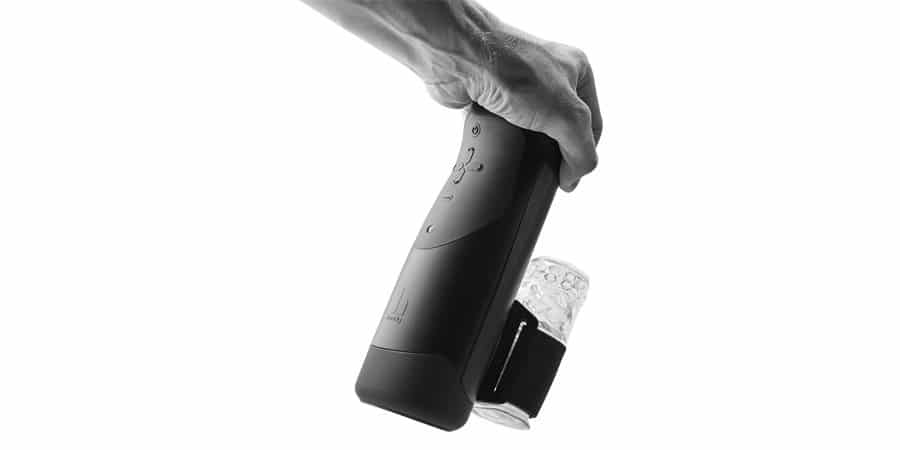 Pros and Cons of the Handy

Main Con: While incredibly well-designed, Handy remains a rather chunky toy. It is relatively heavy and needs to be plugged into a wall socket.

Our detailed, independent review of Handy

I am a tough one to please -only Aliki knows how to- and I am particularly exacting on sex toys. I want them to be beautifully designed, of good quality, easy to use and non-intrusive. I am a dream Beta tester!

When one morning, at the height of the COVID-19 lockdown, the courier guy delivered a packet, I had very modest hopes. So much so, that I didn’t open it for a week (sorry Handy guys!)

Since the moment I tore open the package, though, I have to admit that Handy has become a regular fixture in my private sexual time. I confess, hand on heart, that Handy comes close to ticking all the boxes on my long check-list of what makes a good sex toy for men.

What’s in the box of this male sex toy?

Handy comes in a stylish box more reminiscent of silicon-valley than porn-valley. And indeed, it does combine some cool tech with sexy pleasures.

Inside, there is the Handy itself, together with the TrueGrip™ sleeve and the power supply neatly tucked next to it. You will also find a few samples of lubricant and a user manual. 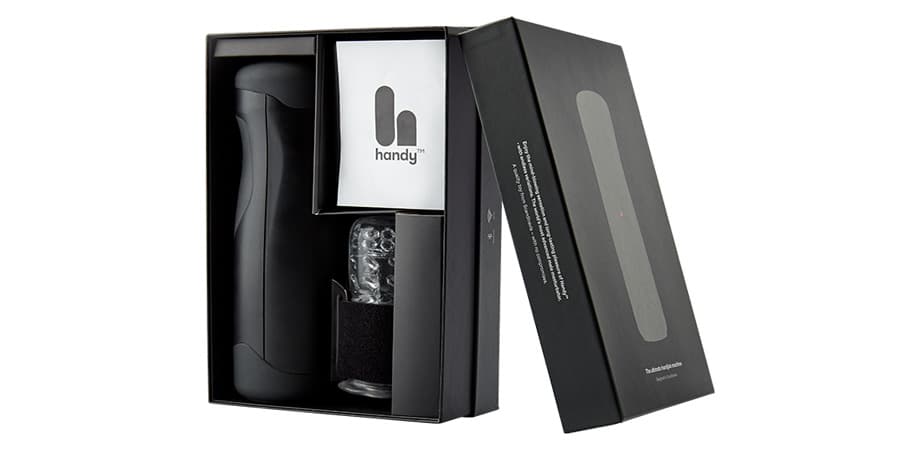 By now I have tried Handy quite a few times and I can safely say that it largely delivers on its two promises: a) giving you mind-blowing orgasms and b) being the most advanced male sex toy (more on that later).

The first striking thing about Handy is its minimalist and elegant design. At first glance, it looks like something that would sit nicely on a shelf in your living-room.

It is no surprise, really. Handy was designed in Norway, and remains true to a long Nordic tradition of sleek, minimal and functional design.

Thanks to the adjustable TrueGrip™ Band, Handy grips your cock at the preferred height: grabbing you by the base or rubbing you closer to the head.

The length of the stroke is also adjustable. You have the option to alternate between extended movements or shorter jerks.

What I found most impressive, though, was the way Handy appears to adjust its intensity when you ejaculate. It felt just like a partner would, as she or he accompanies you spurt after spurt until you settle back.

I don’t know how the wizards at SweetTech did it, but boy it feels great!

How does Handy work?

Set up is very easy. You plug in the Handy, slide your penis into the sleeve -with or without lube- and adjust the TrueGrip™ band at the desired height. After that, you’re set to go.

The masturbator comes with a LED indicator, an off/on button and a simple D-pad. These directional buttons control the speed (left/right button) and the stroke (up/down button).

It was a bit of a nuisance to fiddle with the D-pad in the dark and in the heat of the moment – and this from a guy for whom the PlayStation control pad is second-nature. Thankfully, however, Handy comes with Smart WiFi controls that allow you to bypass the D-pad and control everything from the touch-screen of your mobile phone.

And here’s where it gets really cool: the Handy can mirror the movement of your mobile. If you want a quicker stroke, simply shake your mobile up and down, and your masturbator will follow! At the time of writing, the Smart WiFi is still in Beta version, but what it can already do looks promising.

SweetTech AS, the manufacturer of Handy, also promises future firmware updates that will “make the product new” with additional features and optimization. If these guys keep their word, Handy would truly be one heck of a male sex toy!

A male sex toy for couples

Now, this is a real treat. We are used to female vibrators that can be controlled by partners – whether they’re next to you in bed or half-way across the world. It is, however, the first time I own a male masturbator that does that!

Aliki and I give a lot of importance to sex toys that allow for couple play (you are reading Couple of Secrets after all!). They are relationship enhancers.

At the moment the controls are pretty basic. The guys at SweetTech, however, are promising a companion APP which, I expect, will enhance this experience. I look forward to it!

Is Handy the most advanced male sex toy to date?

There’s no sure-fire way of confirming SweetTech’s claim, but judging from what I have seen, Handy is pretty cutting edge.

The best feature of Handy is that it is ‘Internet of Things’ ready. This means that the device can connect to other IoT gadgets, effectively turning Handy into a male sex toy that can truly evolve over time!

There is no limit. In the future, Handy can be made to connect to VR head-sets, Google Home, AI virtual assistants and even your Robot vacuum cleaner if you so wish (and I hope yours has good suction power!).

Can’t wait! Would Siri be jealous, I wonder?

At the time of writing, I haven’t tried it, but I will do so at the first opportunity and tell you about it.

What is Handy not good for?

No product is perfect. Sex toys are no exception.

Perhaps the biggest drawback of Handy is its reliance on a power supply. This makes it a bit unwieldy and eliminates completely the possibility of using it in a wet environment, like a bath.

At $159/€189  – plus shipment cost – Handy certainly requires an investment. Given the sturdiness of its design, the quality of its performance and the future-proofing promised through regular firmware updates and IoT readiness, the price is understandable.

Still, it will only be an option if you are looking for a top-end toy and have the budget for it. 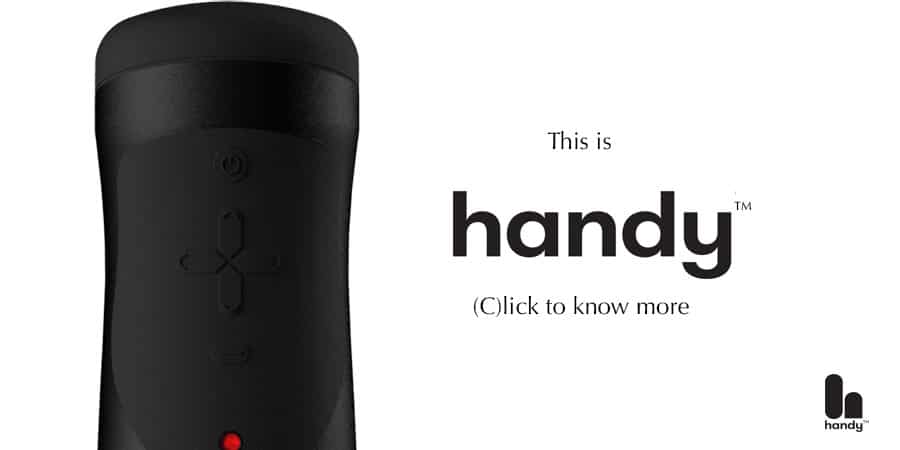 Male Sex Toy Review: The Handy at a glance

The Handy has a D-Pad on the upper part that allows you to change the speed and the stroke. While this may be a tad unwieldy at times, the Smart WiFi option gives you the possibility of using your mobile to control Handy via haptics.

Couple or solo use

Smart Wifi allows your partner to play with you. This a significant plus point, which should be further enhanced by the upcoming companion App. Furthermore, this feature also makes it a sex toy for couples.

CONS
-Needs to be plugged into a wall socket.
-Slightly noisy.
-Too bulky and heavy for convenient travel.
-Not waterproof.
Quality
Design
Functionality
Sexy factor
Value for money

If you are thinking of investing in a high-end sex toy for men (and other penis-owners) you cannot go wrong with Handy. It is built to perform, to last and, more importantly, to give tons of pleasure.

Have you tried Handy? Did it work for you? Let us know about your impressions and rate the product below!

Where to buy Handy from.

If you think you would like to own a Handy, we would appreciate it if you bought the handy through our website. You will also be helping us maintain Couple of Secrets. Thanks!

This is an independent review, not a sponsored one. We have not received any payment or any other form of compensation for the review written above. The supplier may have provided us with a free sample of the product for the purposes of this review.