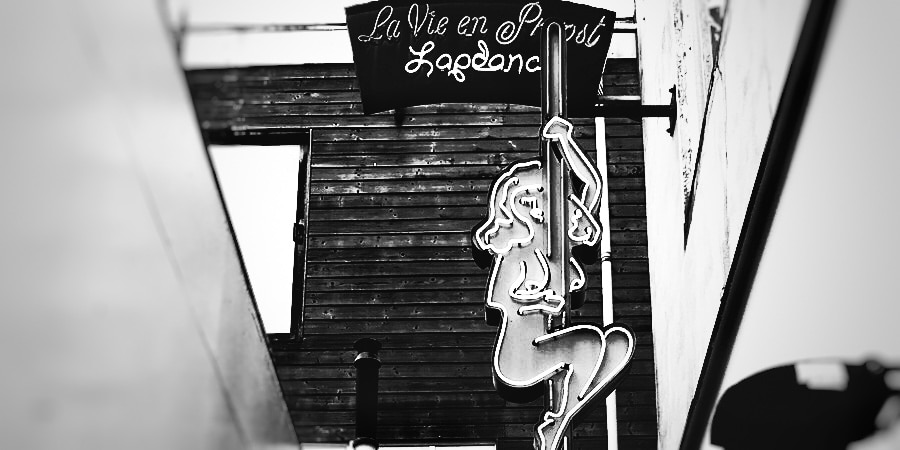 Since the very start of our relationship, Xander and I have experimented a lot sexually.

Our sexual space has evolved and our sexual fantasies have changed over time. So much, that until recently I had the impression that we had pretty much tried out everything we wanted to try. But Xander surprised me recently with a suggestion.

-Shall we go have a lap dance during our weekend in Amsterdam?

-Yes, a professional lap dance. I would love to see a naked woman dance for you, babe. At a club or even in one of these private rooms? It’d be so sexy!

I had never had a lap dance or a professional striptease. Maybe because it’s the kind of thing a man gets more exposed to through male friends. And, let’s face it, most strip clubs are meant for men.

I didn’t need a lot of convincing, as you might imagine. Then some time passed and the I forgot all about it. Until said weekend arrived.

Xander, often being the organizer of the couple, surprised me for the second time after our dinner.

-According to my research, one of the top lap dance bars of Amsterdam, Aliki!

La Vie en Proost is in the middle of the red-light district of Amsterdam. Like most of the places we have visited in Amsterdam, it’s a strange combination: it’s a rather small, cramped venue hailing from another century with direct, in-your-face sexuality. It’s neither polished and nor pretentious. Nudity is presented in a convivial, open-hearted atmosphere that I find fascinating and refreshing. And there was not even a trace of the disturbing, sleazy feeling I get sometimes in hardcore red-light districts.

At the entrance, we were greeted by a hot brunette resting her long legs on the welcome bench. She was chatting heartily with the muscular bouncer.

The showgirls, of all different sizes and colours, danced half-naked on the bar top, their over-friendly smiles teasing the men hanging at their feet. For those who chose to have a lap dance, the rules got explained up-front: no kissing and no groping. We soon realized that the place offered no private dances. I was looking at the girls parading trying to decide which one I liked most, if any.

– ‘I am not sure.’ A new girl strutted on-stage and Xander followed her with his eyes. ‘She is sexy.’ He nodded towards her.

The newcomer had long blond hair, huge sensual breasts, the stride of a dancer and a wide, open smile on her face. She was clearly enjoying the performance she was giving and the attention she was receiving.

– ‘Ok boys! Who’s next?’ she asked hoarsely to the direction of the group of men standing in front of us. They looked at each other amused and slightly perplexed. For an awkward moment, they hesitated. It was my cue.

-“Us!” I shouted through the loud dance music, pushing Xander forward and laying a twenty on the bar in front of her.

It was extremely sexy to see her voluptuous body move on Xander’s lap. My lover held her by her hips, his face half-buried between her generous breasts. She turned around with astonishing agility and started shaking her booty against Xander’s stiff groin.

It turned me on alright. Part of me felt strange seeing the hands I love so much caress the body of another woman -I always have mixed feelings about that. But the lap dance was clearly a performance, not an exchange of intimacy. Fascinated as I was, after a while I found myself not knowing what to do with myself. At that moment the lovely blond turned around, laid my hand on her breast and gave me a fleeting kiss on the mouth. I was completely won over.

“What a fantastic couple!”, she winked at us both before un-straddling Xander and returning on the bar.